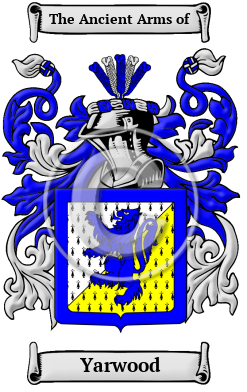 Early Origins of the Yarwood family

The surname Yarwood was first found in Shropshire, an English county, bordering Wales to the west. It is here that Griffin filius Yeruerth was registered in the Pipe Rolls of 1196. Later, Jarforth filius Ithell was found in the Assize Rolls for Shropshire in 1221. [1]

Early History of the Yarwood family

More information is included under the topic Early Yarwood Notables in all our PDF Extended History products and printed products wherever possible.

Yarwood migration to the United States +

Yarwood Settlers in United States in the 17th Century

Yarwood Settlers in United States in the 19th Century

Yarwood Settlers in Canada in the 19th Century

Yarwood Settlers in Australia in the 19th Century

Historic Events for the Yarwood family +