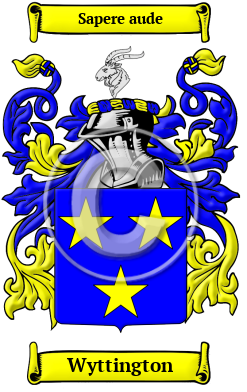 Early Origins of the Wyttington family

The surname Wyttington was first found in Derbyshire at Whittington, a parish, in the union of Chesterfield, hundred of Scarsdale. There are others locals of the same name found in Gloucestershire, Lancashire, Northumberland, Shropshire, Staffordshire, Warwickshire and Worcestershire.

To confuse the reader more, we draw your attention to the following quote under the township of Whittingham: "Warin de Whitington, who lived in the reign of John, held lands in the township, and his descendants held the manor in the reign of Edward II. The family long continued connected with the place; and a Richard Whittingham, who had two sons and a daughter, was living in the middle of the last century. [1700s]"

Richard Whittington (c. 1354-1423), the medieval merchant and politician who was the inspiration for the folk tale "Dick Whittington and His Cat" was from Gloucestershire, but his family claim descent from Staffordshire. Like the rhyme claims, he was in fact, Lord Mayor of London four times. [1]

"A nefarious attempt has been made to rob him of his cherished and beneficent cat, whose existence has been explained away as a popular error. She is said to have been nothing more than a flat-bottomed boat, such as are commonly used in the Thames for carrying coal from the colliers to the wharf, then known as "cats," of which he owned a considerable number. With these, as is asserted, he built up his fortune. Others, again, maintain that his success in life " was the result of commercial transactions, called in the fourteenth century ' achatting.'" But, as if to refute these laboured and far-fetched derivations, an efifigy that curiously confirmed the old belief was brought to light in 1861. " In an old house, then pulled down in Westgate Street, Gloucester, was found a sculptured tablet intended to be placed over a doorway or chimney-piece, representing a boy in a long loose gown reaching to his feet, with a hood dropped on his shoulder, and fastened by a button to the throat, holding a cat in his arms. The Whittingtons had, according to old deeds, a tenement in Westgate Street in 1460." [2]

Early History of the Wyttington family

Spelling variations of this family name include: Whitington, Whittington, Whyttington and others.

Distinguished members of the family include Robert Whittington (Wittinton) (c. 1480-c. 1553), an English grammarian; and Sir Richard Whittington (c. 1354-1423), the famous "Dick Whittington," was Lord Mayor of London in...
Another 30 words (2 lines of text) are included under the topic Early Wyttington Notables in all our PDF Extended History products and printed products wherever possible.

Migration of the Wyttington family