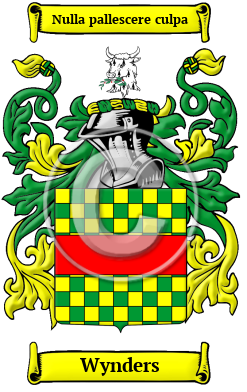 Early Origins of the Wynders family

The surname Wynders was first found in Cumberland where they held a family seat and were Lords of the manor of Winder. This family name held considerable estates in both Cumberland and Westmorland.

Early History of the Wynders family

This web page shows only a small excerpt of our Wynders research. Another 90 words (6 lines of text) covering the years 1733, 1693, 1752 and 1714 are included under the topic Early Wynders History in all our PDF Extended History products and printed products wherever possible.

Distinguished members of the family include Henry Winder (d. 1733), an English farmer and his son; Henry Winder (1693-1752), an English nonconformist minister and chronologist. "His grandfather, Henry Winder, farmer, who lived to be...
Another 34 words (2 lines of text) are included under the topic Early Wynders Notables in all our PDF Extended History products and printed products wherever possible.

Migration of the Wynders family

Some of the first settlers of this family name or some of its variants were: Francis Winder who settled in Virginia in 1622; George Winder settled in Jamaica in 1694; Andreas and Anna Margaret Winder settled in Philadelphia, Pennsylvania in 1734.