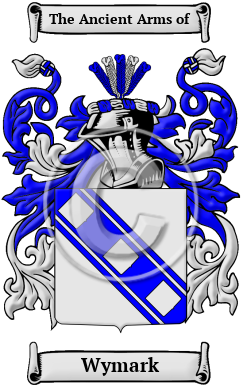 Early Origins of the Wymark family

The surname Wymark was first found in the Saxon village of Weymouth in Dorset. The place name dates back to at least 934 when it was first listed as Waimouthe. Literally the place name means "mouth of the River Wey," an ancient English river name of unknown origin and meaning. [1]

An ancient sea-port and market-town, Weymouth and Melcombe-Regis, both towns are on opposite sides of the harbour. "Weymouth, which derives its name from its situation at the mouth of the river Wey, is the more ancient, and was probably known to the Romans, as in the immediate neighbourhood there are evident traces of a vicinal way. It is also noticed in the Norman survey, with several other places, under the common name of Wai, or Waia, among which it. is clearly identified by the mention of the salterns exclusively belonging to it." [2]

"This surname is derived from a geographical locality. 'of Weymouth,' a seaport and market-town in Dorset." [3] [4]

Early History of the Wymark family

Distinguished members of the family include George Weymouth or Waymouth (c. 1585-c. 1612), an English explorer from Devon of the area now occupied by the state of Maine. "In 1605 Weymouth was put in command of the Archangel, a vessel fitted out for trade and discovery by the Earl of Southampton and Lord Arundell of Wardour. On the 14th they sighted Flores, and on 14 May made the land, described as 'a whitish, sandy cliff,' identified as Sankaty Head, the eastern extremity of Nantucket. On 18 May they arrived at an island now identified as Monhegan, eighty-four miles to the north-east from...
Another 153 words (11 lines of text) are included under the topic Early Wymark Notables in all our PDF Extended History products and printed products wherever possible.

Migration of the Wymark family