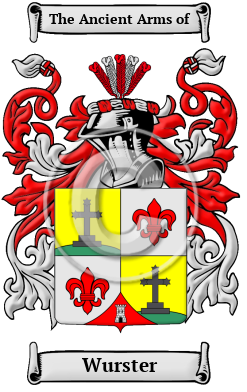 Bavaria, Germany is the ancestral home of the Wurster family. The Germans began using hereditary surnames in the 12th century. Wurster is an occupational name, which was derived from the kind of work done by the original bearer. It is a name for a person who made sausages, a skill which has been held in high regard since the Middle Ages. The surname Wurster is derived from the Old German word Wurst, or Wurstmacher, which denotes a sausage-maker.

Early Origins of the Wurster family

The surname Wurster was first found in Bavaria, where the Wurster family held a family seat from ancient times. Their allegiances were sought eagerly by princes of the region in attempts to enhance and consolidate their political power.

Early History of the Wurster family

This web page shows only a small excerpt of our Wurster research. Another 72 words (5 lines of text) covering the years 1746 and 1765 are included under the topic Early Wurster History in all our PDF Extended History products and printed products wherever possible.

In the medieval era, many different cultural groups lived in the German states. There are thus many regional variations of German surnames from that era. Westphalians spoke Low German, which is similar to modern Dutch. Many German names carry suffixes that identify where they came from. Others have phrases attached that identify something about the original bearer. Other variations in German names resulted from the fact that medieval scribes worked without the aid of any spelling rules. The spelling variations of the name Wurster include Wurster, Wursten, Wurstel, Wurstere, Wurstle, Wurst, Wuester, Wuersten, Wuestel, Wuestere, Wuerstle, Wuerst, Worster, Worsten, Worstel, Worstere, Worstle, Worst, Woerster, Woersten, Woerstel, Woerstere, Woerstle and many more.

More information is included under the topic Early Wurster Notables in all our PDF Extended History products and printed products wherever possible.

In the United States, the name Wurster is the 11,761st most popular surname with an estimated 2,487 people with that name. [1]

Wurster migration to the United States +

Wurster Settlers in United States in the 18th Century

Wurster Settlers in United States in the 19th Century