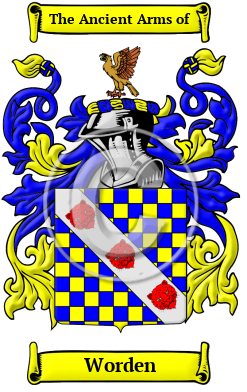 The surname Worden is thought to be derived from Warden, a parish in the union of Hexham, N. W. division of Tindale ward, in Northumberland. "This place derives its name, originally Wardon, from the remarkable don or hill under which the church and village are beautifully situated on the south-east, and on the rocky summit of which are vestiges of a circular British camp, subsequently occupied by the Romans, who raised additional works. Within the area of this encampment, the bases of buildings and several querns have been found; and not far from the vicarage-house are traces of a similar fort, most probably connected with the wall of Severus, near which the parish is situated. The manor and church, in 1298, belonged to the monks of Hexham, to whom they had been granted, according to the record, "from a time beyond all memory," by Adam de Tyndale." [1]

Early Origins of the Worden family

The surname Worden was first found in Hertfordshire where the Saxon, Wluric Uuerdenus held lands before the taking of the Domesday Survey in 1086.

Early History of the Worden family

Distinguished members of the family include Werric Werden, scion of the family, and Wynkyn de Worde (d. 1535), English printer of over 700 books. "His real name was Jan van Wynkyn ('de Worde' being merely a place name), and in the sacrist's rolls of Westminster Abbey from 1491 to 1500 he figures as Johannes Wynkyn. While still a young man he came over to England and...
Another 65 words (5 lines of text) are included under the topic Early Worden Notables in all our PDF Extended History products and printed products wherever possible.

In the United States, the name Worden is the 3,562nd most popular surname with an estimated 7,461 people with that name. [8]

Worden migration to the United States +

Worden Settlers in United States in the 17th Century

Worden Settlers in United States in the 18th Century

Worden Settlers in United States in the 19th Century

Worden Settlers in Canada in the 18th Century

Worden Settlers in Canada in the 19th Century

Worden Settlers in Australia in the 19th Century

Worden Settlers in New Zealand in the 19th Century

Historic Events for the Worden family +