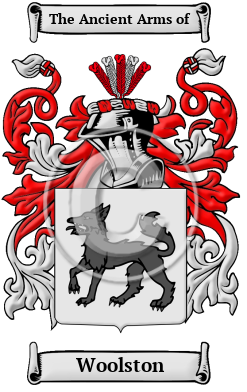 In ancient Anglo-Saxon England, the ancestors of the Woolston surname lived in one of a variety of similarly-named places. Settlements named Woolstone are in Buckinghamshire and Devon. Wolstan is a parish in Warwickshire and Woolston is a hamlet in Somerset. The surname Woolston belongs to the large category of Anglo-Saxon habitation names, which are derived from pre-existing names for towns, villages, parishes, or farmsteads.

Early Origins of the Woolston family

The surname Woolston was first found in Lancashire at Woolstone, a township, in the parish and union of Warrington, hundred of West Derby. Saint Walstan (or Walston) (died 1016) dedicated his life to farming and the care of farm animals and is accordingly the patron saint of farms, farmers, farmhands, ranchers and husbandrymen.

"[Bawburgh, or Babur in Norfolk] is distinguished as the birthplace of St. Walstan; he lived at Taverham, where he died in 1016, and his remains were removed hither, and enshrined in a chapel in the parish church. The resort of pilgrims to visit his shrine greatly enriched the vicar and officiating priests, who, in 1309, rebuilt the church; but the chapel in which the remains of the saint were deposited was demolished in the reign of Henry VIII." [1]

Early History of the Woolston family

It is only in the last few hundred years that the English language has been standardized. For that reason, early Anglo-Saxon surnames like Woolston are characterized by many spelling variations. As the English language changed and incorporated elements of other European languages, even literate people changed the spelling of their names. The variations of the name Woolston include: Woolston, Woolton, Wolston and others.

Notables of this surname at this time include: John Woolton (or Wolton) (1535?-1594), English Bishop of Exeter. He was born at Whalley in Lancashire about 1535 (according to Godwin he was born at Wigan), was the son of John Woolton of Wigan, by his wife Isabella, daughter of John Nowell of Bead Hall, Whalley. "He was admitted student of Brasenose College, Oxford, on...
Another 63 words (4 lines of text) are included under the topic Early Woolston Notables in all our PDF Extended History products and printed products wherever possible.

Woolston migration to the United States +

Many English families tired of political and religious strife left Britain for the new colonies in North America. Although the trip itself offered no relief - conditions on the ships were extremely cramped, and many travelers arrived diseased, starving, and destitute - these immigrants believed the opportunities that awaited them were worth the risks. Once in the colonies, many of the families did indeed prosper and, in turn, made significant contributions to the culture and economies of the growing colonies. An inquiry into the early roots of North American families has revealed a number of immigrants bearing the name Woolston or a variant listed above:

Woolston Settlers in United States in the 17th Century

Woolston Settlers in Australia in the 19th Century