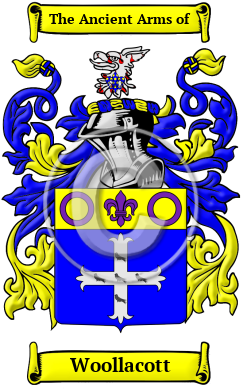 The Woollacott surname is a habitational name derived from the place name Woolcot in Somerset, which in turn is thought to come from the Middle English words "wolle," meaning "spring," and "cot" meaning a cottage or shelter.

Early Origins of the Woollacott family

The surname Woollacott was first found in Devon where they held a family seat from very ancient times, before and after the Norman Conquest in 1066.

Early History of the Woollacott family

This web page shows only a small excerpt of our Woollacott research. Another 77 words (6 lines of text) covering the years 1679, 1767, 1751 and 1754 are included under the topic Early Woollacott History in all our PDF Extended History products and printed products wherever possible.

Another 48 words (3 lines of text) are included under the topic Early Woollacott Notables in all our PDF Extended History products and printed products wherever possible.

Migration of the Woollacott family