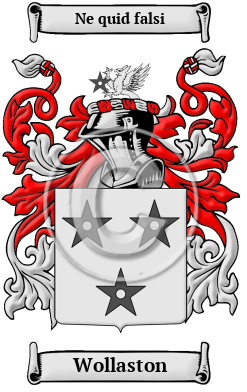 Early Origins of the Wollaston family

The surname Wollaston was first found in Staffordshire, where "the family were lords in early times, and which they sold to the Aston family temp. Richard I. Wollaston is in the parish of Old Swinford. Some of the Wollastons may derive their name from other places so called in cos. Gloucester and Shropshire. " [1]

Wollaston is a chapelry, in the parish of Alberbury, union of Atcham, hundred of Ford in Shropshire. The chapelry dates back to the Domesday Book of 1086 when it was first listed as Willavestune and literally meant "farmstead or village of a man called Wiglaf," from the Old English personal name + "tun." [3]

Wollaston in Northamptonshire also dates back to the Domesday Book, but had a different spelling, Wilavestone, but had a similar meaning. [4]

There is also a township of Wollaston in the parish of Old Swinford, union of Stourbridge, Lower division of the hundred of Halfshire, Worcestershire. [5]

Early History of the Wollaston family

Notables of the family at this time include Sir John Wollaston (died 1658), an English merchant, Lord Mayor of London in 1643, Sheriff of London (1638-39), Prime Warden of the Goldsmiths Company (1639-40), president of Christ's Hospital (1649.) William Wollaston (1660-1724), was an English moral philosopher, born on 26 March 1659-16660 at Coton-Clanford, Staffordshire, the son of William Wollaston. "The Wollastons were an old Staffordshire family. One, Henry Wollaston (d. 1616), went to London and returned with a fortune made in trade. A dispute between his sons as to the...
Another 89 words (6 lines of text) are included under the topic Early Wollaston Notables in all our PDF Extended History products and printed products wherever possible.

Wollaston migration to the United States +

Wollaston Settlers in United States in the 19th Century

Wollaston Settlers in United States in the 20th Century

Wollaston Settlers in Canada in the 20th Century

Wollaston Settlers in Australia in the 19th Century