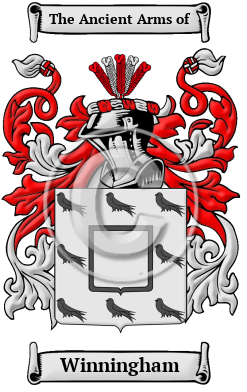 The Winningham surname is generally thought to be a habitational name taken on from a place name, such as from Winnington, an area of the town of Northwich in Cheshire, or Winningham, a now lost place in from East Yorkshire.

Early Origins of the Winningham family

The surname Winningham was first found in Cheshire where the family is "an ancient family of 'that seed-plot of gentry,' Cheshire. The paternal name was De Croxton, but in the reign of Edward I., Robert son of Lidulfus de Croxton, marrying the heiress of Winnington of Winnington, took the surname of his wife's family. [1] [2]

"Winnington Hall, anciently the seat of the Winningtons" [3] is located in the township of Winnington. Winnington is also a township, in the parish of Muckleston in Staffordshire but we must look to Cheshire for the family's origin.

Early History of the Winningham family

Outstanding amongst the family at this time was Sir Francis Winnington, (1634-1700), English lawyer and politician, Solicitor General for England and Wales (1674-1679); and his son, Salwey Winnington (1666-1736), of Stanford Court, Worcestershire, an English landowner and Member of...
Another 38 words (3 lines of text) are included under the topic Early Winningham Notables in all our PDF Extended History products and printed products wherever possible.

In the United States, the name Winningham is the 13,131st most popular surname with an estimated 2,487 people with that name. [4]

Winningham migration to the United States +

Winningham Settlers in United States in the 20th Century