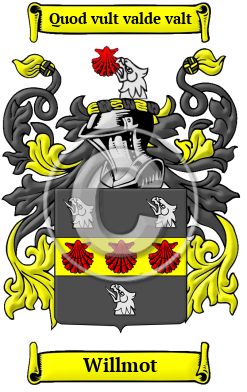 The Willmot surname evolved from a form of the personal name William.

Early Origins of the Willmot family

The surname Willmot was first found in Derbyshire where "for 350 years, the Derbyshire Wilmots, who have been honoured with three baronetcies, have been settled at Derby or at Cliaddesden in its neighbourhood. There were Wilmots in Cambridgeshire in the 13th century." [1]

Early History of the Willmot family

Spelling variations of this family name include: Willmot, Wilmot, Wilmott, Willmott and others.

Notables of the family at this time include Charles Wilmot (c.1570-1644), created 1st Viscount Athlone on 4 June, 1621; as well as his son, Lieutenant-General Henry Wilmot (1612-1658), an English Cavalier, who fought for the Royalist cause during the Wars of the Three Kingdoms, and...
Another 45 words (3 lines of text) are included under the topic Early Willmot Notables in all our PDF Extended History products and printed products wherever possible.

Migration of the Willmot family to Ireland

Some of the Willmot family moved to Ireland, but this topic is not covered in this excerpt.
Another 39 words (3 lines of text) about their life in Ireland is included in all our PDF Extended History products and printed products wherever possible.

Willmot Settlers in Australia in the 19th Century

Historic Events for the Willmot family +