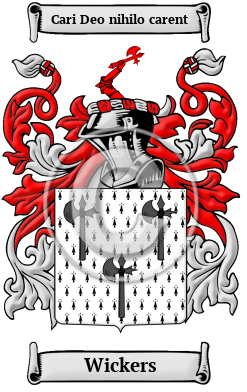 The vast movement of people that followed the Norman Conquest of England of 1066 brought the Wickers family name to the British Isles. They lived in Sussex. The name, however, derives from the Old English word wic, which describes someone who lives at an outlying settlement.

Early Origins of the Wickers family

The surname Wickers was first found in Surrey at Wyke, a tything, in the parish of Worplesdon, union of Guildford, First division of the hundred of Woking. "This place is mentioned in Domesday Book under the name of Wucha, and at an early period was held by a family called De Wyke." [1]

Another branch of the family was found at Yatton in Somerset. "The greater portion of [the church of Yatton] appears to have been rebuilt in the 15th century, by the Wyck family, to one of whom is a monument bearing his effigy, in the north transept." [1]

Thomas de Wykes (fl. 1258-1293), the English chronicler, took the habit of a canon regular at Osney Abbey, near Oxford, on 14 April 1282. "He mentions in his chronicle various namesakes and probable kinsfolk, including Robert de Wykes (d. 1246), Edith de Wyke (d. 1269), and John de Wykes, who in 1283 took a 'votum profectionis'. The name is a fairly common one, both as a personal and a place name, so that it is highly unsafe to identify him with other bearers of the same name, such as Thomas de Wyke, priest, who before 1249 wished to become a Franciscan friar." [2]

Early History of the Wickers family

A multitude of spelling variations characterize Norman surnames. Many variations occurred because Old and Middle English lacked any definite spelling rules. The introduction of Norman French to England also had a pronounced effect, as did the court languages of Latin and French. Therefore, one person was often referred to by several different spellings in a single lifetime. The various spellings include Weekes, Weeks, Wikes, Wykes, Wyke, Wix, Wicks, Weykes and many more.

Outstanding amongst the family at this time was Thomas Wykes (1222-c.1293), English chronicler, a canon regular of Oseney Abbey, near Oxford; Thomas Wykes (died c.1430), Member of Parliament for Cambridgeshire; Thomas Wykes (fl. 1554), of Moreton Jeffries, Herefordshire, an English politician, Member of the Parliament for Leominster in November 1554; Richard Wyche (or Wiche) (1554-1621), a...
Another 56 words (4 lines of text) are included under the topic Early Wickers Notables in all our PDF Extended History products and printed products wherever possible.

Wickers migration to the United States +

Many English families left England, to avoid the chaos of their homeland and migrated to the many British colonies abroad. Although the conditions on the ships were extremely cramped, and some travelers arrived diseased, starving, and destitute, once in the colonies, many of the families prospered and made valuable contributions to the cultures of what would become the United States and Canada. Research into the origins of individual families in North America has revealed records of the immigration of a number of people bearing the name Wickers or a variant listed above:

Wickers Settlers in United States in the 17th Century

Wickers Settlers in Australia in the 19th Century