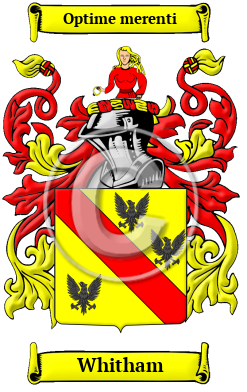 Early Origins of the Whitham family

The surname Whitham was first found in Lincolnshire at North Witham, a small village in South Kesteven. However, Witham is also a town in the county of Essex. The parish of Witham appears in the Domesday Book of 1086 and the manor of Witham was given to the Knights Templar in 1148. John de Wytham, was 'the king's chaplain' in 1286. [1] Witham Friary is a small village and civil parish located in Somerset. "Ledstone Hall [in Ledstone, in the West Riding of Yorkshire] is a handsome mansion, anciently the seat of the Witham family." [2]

Early History of the Whitham family

Notables of the family at this time include William Witham (or Wytham) (died before 1473), English cleric who was incumbent at St Marylebone until 12 November 1454, when he exchanged the office for that of Archdeacon of Stow. He was then Archdeacon of Leicester (from 1458), Dean of Arches (from c.?1460) and Dean of Wells (from 1467) until his death before 1473. Thomas Witham (c.1420-1489), was an English Chancellor of the Exchequer under Kings Henry VI and Edward IV; and Thomas Whetham, was an English lawyer and politician who sat in the House of Commons in 1624. Nathaniel Whetham (1604-1668), was an English...
Another 121 words (9 lines of text) are included under the topic Early Whitham Notables in all our PDF Extended History products and printed products wherever possible.

In the United States, the name Whitham is the 16,672nd most popular surname with an estimated 2,487 people with that name. [3]

Whitham migration to the United States +

Whitham Settlers in United States in the 19th Century

Whitham Settlers in United States in the 20th Century

Whitham Settlers in Australia in the 19th Century

Whitham Settlers in New Zealand in the 19th Century

Historic Events for the Whitham family +