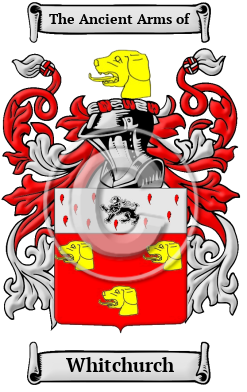 Early Origins of the Whitchurch family

The surname Whitchurch was first found in Buckingham, Devon, Glamorgan, Hereford, Oxford, Pembroke, Shropshire, Somerset, Warwickshire at Whitechurch. Literally meaning "at the White Church," it was anciently recorded as Alibum Monasterium in Latin. In many cases dated before the Domesday Book of 1086, the oldest recording was found in Hampshire where it was listed as Hwitancyrice in 909.

The Shropshire parish has an interesting note: "This place was anciently called Album Monasterium, and Blancminster, which terms have the same signification as its present name, and appear to imply the existence of a monastery. In 1211, King John assembled his forces here, prior to attacking the Welsh, on which occasion he penetrated to the foot of Snowdon, in North Wales. " [1]

The Hundredorum Rolls of 1273 list some of the first records of the family in various early spellings: William de Witchirch, Oxfordshire; and Nicholas de Withcharch, Buckinghamshire. [2]

Early History of the Whitchurch family

This web page shows only a small excerpt of our Whitchurch research. Another 125 words (9 lines of text) covering the years 1510, 1600, 1544, 1455, 1487 and 1172 are included under the topic Early Whitchurch History in all our PDF Extended History products and printed products wherever possible.

Spelling variations of this family name include: Whitchurch, Whitechurch, Wittchurch, Witchurch and many more.

More information is included under the topic Early Whitchurch Notables in all our PDF Extended History products and printed products wherever possible.

In the United States, the name Whitchurch is the 18,385th most popular surname with an estimated 2,487 people with that name. [3]

Migration of the Whitchurch family to Ireland

Some of the Whitchurch family moved to Ireland, but this topic is not covered in this excerpt.
Another 62 words (4 lines of text) about their life in Ireland is included in all our PDF Extended History products and printed products wherever possible.

Whitchurch migration to the United States +

Whitchurch Settlers in United States in the 17th Century