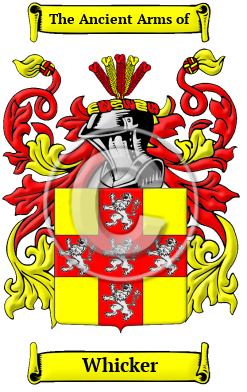 Early Origins of the Whicker family

The surname Whicker was first found in Essex at Wickford, a parish, in the union of Billericay, hundred of Barstable. [1]

Conjecturally, the surname is descended from the tenant of the village and lands of Wickford, Osborn, Teher and FitzThorold, Norman men at arms, from the Bishop of Bayeux. [2]

One of the first listings of the family was Robert de Wikeford e (d. 1390), Archbishop of Dublin, "is said to have belonged to the family of Wickford or Wykeford of Wickford Hall, Essex. He was a fellow of Merton College, Oxford, and a doctor of laws in 1344. He became a king's clerk, and in or before 1368 was appointed Archdeacon of Winchester. On 18 July 1376 he was appointed Chancellor of Ireland, and he was reappointed on 26 Sept. 1377, after the accession of Richard I. " [4]

Early History of the Whicker family

This web page shows only a small excerpt of our Whicker research. Another 58 words (4 lines of text) covering the years 1200, 1240 and 1249 are included under the topic Early Whicker History in all our PDF Extended History products and printed products wherever possible.

More information is included under the topic Early Whicker Notables in all our PDF Extended History products and printed products wherever possible.

In the United States, the name Whicker is the 13,880th most popular surname with an estimated 2,487 people with that name. [5]

Whicker migration to the United States +

Whicker Settlers in United States in the 19th Century

Whicker Settlers in Australia in the 19th Century