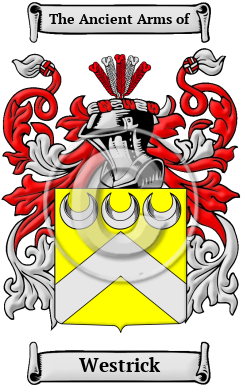 Early Origins of the Westrick family

The surname Westrick was first found in Cumberland where they held a family seat on the English/Scottish border. After the Norman Conquest of England many of Duke William's rebellious Barons moved north. The border became a convenient no-man's land. Notable families such as the Percy, the Umfravilles and the Nevilles gathered many supporting clans around them. In the 16th century they became known as the 'unruly clans'. In that century, many of those clans drove their herds south, and they settled in Yorkshire and Lancashire. The name was first recorded in Lincolnshire but as did many Norman nobles the name moved north to Northumberland when William Westreys held estates in 1219. In 1292, Roger de Westwra held the lands of Westwra in Cumberland. Alternatively, the family could have originated in the lands of Westray on the island of Westray, Orkney. In this case, the earliest record of the name was Lord Michael de Westray, knight who witnessed a charter by Henry de St. Clair, Earl of Orkney, apud Kirkwaw (Kirkwall), in 1391. [1]

Early History of the Westrick family

This web page shows only a small excerpt of our Westrick research. Another 128 words (9 lines of text) covering the years 1391 and 1613 are included under the topic Early Westrick History in all our PDF Extended History products and printed products wherever possible.

More information is included under the topic Early Westrick Notables in all our PDF Extended History products and printed products wherever possible.

In the United States, the name Westrick is the 12,290th most popular surname with an estimated 2,487 people with that name. [2]

Migration of the Westrick family