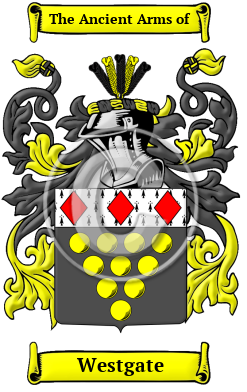 Early Origins of the Westgate family

The surname Westgate was first found in either Durham, Kent, Northumberland or Wiltshire where Westgate is more often than not a village or parish. There are two very early records of the name: William de Westgat who was listed in the Curia Regis Rolls of Surrey in 1199 and Peter de Westgate of Canterbury who was listed in the Pipe Rolls in 1198. The latter "no doubt lived near the west gate of the city." [1] The Hundredorum Rolls of 1273 list: William de Westgate in Norfolk; and Berthona de Westgate in Kent. [2] While one would presume that this name has consistently held the same spelling through the years referring to one who lives by the "west gate" of a town or village, interestingly Westgate on Sea, Kent was first spelt Westgata in 1168. [3]

Early History of the Westgate family

This web page shows only a small excerpt of our Westgate research. Another 101 words (7 lines of text) covering the years 1455 and 1487 are included under the topic Early Westgate History in all our PDF Extended History products and printed products wherever possible.

Spelling variations of this family name include: Westgate, Wesgate, Westegate and others.

More information is included under the topic Early Westgate Notables in all our PDF Extended History products and printed products wherever possible.

In the United States, the name Westgate is the 10,141st most popular surname with an estimated 2,487 people with that name. [4]

Westgate migration to the United States +

Westgate Settlers in United States in the 17th Century

Westgate Settlers in Canada in the 18th Century

Westgate Settlers in Australia in the 19th Century

Historic Events for the Westgate family +