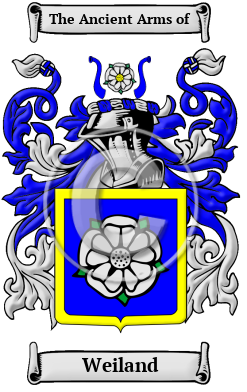 Bavaria, Germany is the original homeland of the Weiland family. Weiland is a patronymic name, a type of surname that derived from the given name of the father of the original bearer. Weiland was derived from a Germanic personal name that is composed of the elements wig, which means war, and land, which means territory or land. The popularity of the name Weiland is due to the fact that it was borne by the supernaturally skilled smith of a folk legend. It is also for this reason that the name Weiland was applied as a nickname to smiths.

Early Origins of the Weiland family

The surname Weiland was first found in Bavaria, where the name was seen in the mediaeval period as one of the notable families of the region. From the 13th century the surname was identified with the great social and economic evolution which made this territory a landmark contributor to the development of Europe. They were also found in the northern regions: Meister Wiland was the builder (1333) of the Peter-Paul church in Liegnitz, Silesia. The name Wieland was also famous through the legend of Wieland der Schmied, the most artful of all black smiths. Indeed, chronicles mention an actual "Wieland der Schmied" in Freiburg in 1341. Other chronicles mention Konrad Wielant of Esslingen in 1301, and Mathias Weland of Greifswald, Pomerania, in 1374.

Early History of the Weiland family

In the medieval era, many different cultural groups lived in the German states. There are thus many regional variations of German surnames from that era. Westphalians spoke Low German, which is similar to modern Dutch. Many German names carry suffixes that identify where they came from. Others have phrases attached that identify something about the original bearer. Other variations in German names resulted from the fact that medieval scribes worked without the aid of any spelling rules. The spelling variations of the name Weiland include Wieland, Wielandt, Wiland, Wielant, Weland and many more.

Another 44 words (3 lines of text) are included under the topic Early Weiland Notables in all our PDF Extended History products and printed products wherever possible.

In the United States, the name Weiland is the 6,247th most popular surname with an estimated 4,974 people with that name. [1]

Weiland migration to the United States +

Between the mid-17th and mid-20th centuries, German settlers arrived in North America by the thousands. Persecution based on religion and poverty were great motivators in this large-scale migration. So too was the opportunity for tenant farmers to own their own land. Ample land and opportunity awaited the settlers who went to such states as Pennsylvania, Texas, New York, Illinois, and California, as well as Ontario and the prairie provinces of Canada. Research into the origins of individual families in North America revealed records of the immigration of a number of people bearing the name Weiland or a variant listed above:

Weiland Settlers in United States in the 18th Century

Weiland Settlers in United States in the 19th Century

Weiland Settlers in United States in the 20th Century