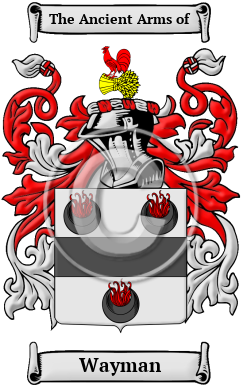 The name Wayman has a rich and ancient history. It is an Anglo-Saxon name that was originally derived from the Anglo-Saxon personal name Wigmund, meaning man of war. [1]

Early Origins of the Wayman family

The surname Wayman was first found in Sussex but "Wymond and Wymund occurred as surnames in Oxfordshire, Bucks, Gloucestershire, and Norfolk during the 13th century." [2]

Early History of the Wayman family

This web page shows only a small excerpt of our Wayman research. Another 274 words (20 lines of text) covering the years 152 and 1520 are included under the topic Early Wayman History in all our PDF Extended History products and printed products wherever possible.

Before English spelling was standardized a few hundred years ago, spelling variations of names were a common occurrence. Elements of Latin, French and other languages became incorporated into English through the Middle Ages, and name spellings changed even among the literate. The variations of the surname Wayman include Wyman, Wyeman and others.

More information is included under the topic Early Wayman Notables in all our PDF Extended History products and printed products wherever possible.

In the United States, the name Wayman is the 5,175th most popular surname with an estimated 4,974 people with that name. [3]

Wayman migration to the United States +

Wayman Settlers in United States in the 17th Century

Wayman Settlers in United States in the 18th Century

Wayman Settlers in United States in the 19th Century

Wayman Settlers in Canada in the 18th Century

Wayman Settlers in Australia in the 19th Century