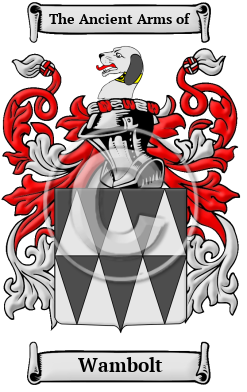 Early Origins of the Wambolt family

The surname Wambolt was first found in Bavaria, where the name Wambolt was anciently associated with the tribal conflicts of the area. The family rose from these conflicts to hold a family seat at Groß-Umstadt, now in the Bundesland (federal state) of Hesse in Germany. The family can be traced to this area since the late mediaeval period.

Early History of the Wambolt family

Another 32 words (2 lines of text) are included under the topic Early Wambolt Notables in all our PDF Extended History products and printed products wherever possible.

Wambolt migration to the United States +

Wambolt Settlers in United States in the 18th Century

Wambolt Settlers in Canada in the 18th Century