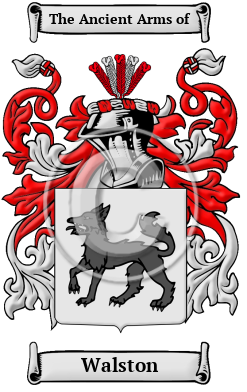 The lineage of the name Walston begins with the Anglo-Saxon tribes in Britain. It is a result of when they lived in one of a variety of similarly-named places. Settlements named Woolstone are in Buckinghamshire and Devon. Wolstan is a parish in Warwickshire and Woolston is a hamlet in Somerset. The surname Walston belongs to the large category of Anglo-Saxon habitation names, which are derived from pre-existing names for towns, villages, parishes, or farmsteads.

Early Origins of the Walston family

The surname Walston was first found in Lancashire at Woolstone, a township, in the parish and union of Warrington, hundred of West Derby. Saint Walstan (or Walston) (died 1016) dedicated his life to farming and the care of farm animals and is accordingly the patron saint of farms, farmers, farmhands, ranchers and husbandrymen.

"[Bawburgh, or Babur in Norfolk] is distinguished as the birthplace of St. Walstan; he lived at Taverham, where he died in 1016, and his remains were removed hither, and enshrined in a chapel in the parish church. The resort of pilgrims to visit his shrine greatly enriched the vicar and officiating priests, who, in 1309, rebuilt the church; but the chapel in which the remains of the saint were deposited was demolished in the reign of Henry VIII." [1]

Early History of the Walston family

Notables of this surname at this time include: John Woolton (or Wolton) (1535?-1594), English Bishop of Exeter. He was born at Whalley in Lancashire about 1535 (according to Godwin he was born at Wigan), was the son of John Woolton of Wigan, by his wife Isabella, daughter of John Nowell of Bead Hall, Whalley. "He was admitted student of Brasenose College, Oxford, on...
Another 63 words (4 lines of text) are included under the topic Early Walston Notables in all our PDF Extended History products and printed products wherever possible.

In the United States, the name Walston is the 4,165th most popular surname with an estimated 7,461 people with that name. [2]

Walston migration to the United States +

To escape the unstable social climate in England of this time, many families boarded ships for the New World with the hope of finding land, opportunity, and greater religious and political freedom. Although the voyages were expensive, crowded, and difficult, those families that arrived often found greater opportunities and freedoms than they could have experienced at home. Many of those families went on to make significant contributions to the rapidly developing colonies in which they settled. Early North American records indicate many people bearing the name Walston were among those contributors:

Walston Settlers in United States in the 17th Century

Walston Settlers in United States in the 19th Century

Walston Settlers in United States in the 20th Century