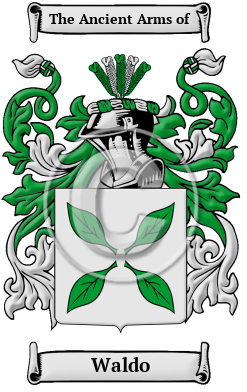 The German state of Bavaria is the ancestral home of the Waldo family. Waldo is a local name. Waldo is a name for someone who lived in or near the woods.

Early Origins of the Waldo family

The surname Waldo was first found in the Franconian-Bavarian border, where the name emerged in mediaeval times as one of the notable families of the region. From the 13th century the surname was identified with the great social and economic evolution which made this territory a landmark contributor to the development of the nation. Indeed, this family is known to be one of the oldest noble families in all of Germany, as well as one of the largest landowners. They originate from their ancestral castle named Waldau which lies in northern Bavaria on the border to Franconia. Because of this proximity to Franconia, family members were listed in both Bavarian and Franconian chronicles of chivalry. Besides the castle Waldau, the family owned the castles Pleystein (Bleistein) and Waldthurn in Bavaria. In the 10th century the family extended into the Lausitz (Lusatia) after the Serbs of this region were conquered by Kaiser Heinrich I. They built the castle Waldau in the Upper-Lausitz three miles from Goerlitz. Without a doubt, the most famous of the family in early times was Peter Waldo, Valdo, Valdes, or Waldes (c. 1140 - c. 1205), the founder of the Waldensians, an early Christian spiritual movement of the Middle Ages.

Early History of the Waldo family

Many cultural groups lived in the German states in medieval times. Each had its own dialect and traditions, and unique variations of popular names. Low German, which is similar to contemporary Dutch, was spoken in Westphalia. German names are characterized by additions such as regional suffixes and phrases that tell something about the origin or background of its original bearer. Further contributing to the variation in German names was the fact that there were no spelling rules in medieval times: scribes recorded names according to their sound. The recorded spelling variations of Waldo include Waldau, Waldauer, Waldov, Waldauw, Waldowe, Waldow, Waldo (English), Waldaw, Walde, Zumwalt, Zumwald, Zumwalde and many more.

Prominent among members of the name Waldo in this period include Johann von Waldau, who was the bishop of Alt-Brandenburg in 1413. Sigismund Rudolph von Waldau, the Lord of Gottberg and Haselbusch, died in 1735 as a Prussian major general and chief of the regiment "von Waldau", while Arnold von Waldau died in 1742 as Governor of Breslau. Among the many members of this family who served as commanders...
Another 68 words (5 lines of text) are included under the topic Early Waldo Notables in all our PDF Extended History products and printed products wherever possible.

In the United States, the name Waldo is the 6,888th most popular surname with an estimated 4,974 people with that name. [1]

Waldo migration to the United States +

European migration to North America began in the mid-17th century and continued unabated until the mid-20th. Many Bavarians made the long trip to escape poverty or persecution based on their religious beliefs. The chance for tenant farmers to own their own land was also a major drawing card. They settled all across the United States in Pennsylvania, Texas, New York, Illinois, and California. Many came to Canada also, settling in Ontario and the prairie provinces. Analysis of immigration records has shown some of the first Waldos to arrive in North America, and among them were:

Waldo Settlers in United States in the 17th Century

Waldo Settlers in Canada in the 19th Century