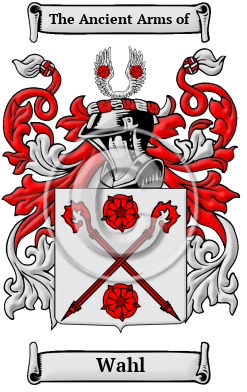 The German surname Wahl emerged in the lands that formed the modern state of Lower Saxony, which is presently bordered by the North Sea, the Hartz mountains and the Elbe and Ems rivers. Lower Saxony was previously a medieval Saxon dukedom. In the Middle Ages, many of the Saxon lands were a part of the Holy Roman Empire, which was characterized by the Feudal System. Before this era, people were known only by a single name. However, as the population increased and travelers set out on their journeys, it became necessary for people to adopt a second name to identify themselves. Many people, such as the Wahl family, adopted the name of their feudal occupation as their surname. However, an occupational name did not become a hereditary surname until the office or type of employment became hereditary. The surname Wahl was an occupational name for an elector. In medieval Germany, electors were the ecclesiastical and temporal princes who elected the Holy Roman Emperor. Ancient records reveal the name Wahl is derived from the Old German word wala, which means choice.

Early Origins of the Wahl family

The surname Wahl was first found in Oldenburg, where the name emerged in mediaeval times as one of the prominent families of these regions. From the 13th century on the surname was identified with the great social and economic evolution which made this territory a landmark contributor to the development of the Prussian nation.

Early History of the Wahl family

This web page shows only a small excerpt of our Wahl research. Another 129 words (9 lines of text) covering the years 1753, 1541, 1617, 1587 and 1753 are included under the topic Early Wahl History in all our PDF Extended History products and printed products wherever possible.

Notables of the time included Saul Wahl Katzenellenbogen (1541-1617) a wealthy and politically influential Polish Jew who is said to have briefly occupied the throne of Poland on 18 August 1587. According to folklore...
Another 34 words (2 lines of text) are included under the topic Early Wahl Notables in all our PDF Extended History products and printed products wherever possible.

Wahl migration to the United States +

Wahl Settlers in United States in the 18th Century

Wahl Settlers in United States in the 19th Century

Historic Events for the Wahl family +