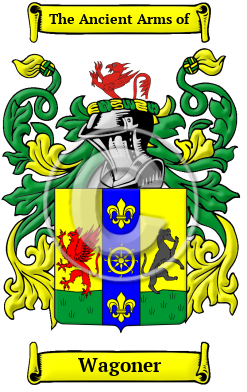 The German territory of Silesia is the noble birthplace of the surname Wagoner. The name is derived from the Middle High German term "wagener," meaning "one who drives or makes wagons," and would likely have been initially borne by a wheelwright or carriage maker.

Early Origins of the Wagoner family

The surname Wagoner was first found in Saxony, where this family name became a prominent contributor to the development of the district from ancient times. Prominent in social affairs, the name became an important part of these turbulent regions as they emerged to form alliances with other families within the Feudal System and the nation.

Early History of the Wagoner family

Spelling variations of this family name include: Wagner, Wegner, Wagoner, Wagener, Waganer, Waggener and many more.

Prominent bearers of the family name Wagoner at this time were Gabriel Wagner (c.1660-c.1717), a radical German philosopher and materialist who wrote under the nom-de-plume Realis de Vienna; Heinrich Leopold Wagner (1747-1779), who was a German dramatist of the Storm and Stress period. The most famous Wagner is unquestionably Richard Wagner...
Another 50 words (4 lines of text) are included under the topic Early Wagoner Notables in all our PDF Extended History products and printed products wherever possible.

In the United States, the name Wagoner is the 2,348th most popular surname with an estimated 12,435 people with that name. [1]

Wagoner migration to the United States +

Wagoner Settlers in United States in the 18th Century

Wagoner Settlers in United States in the 19th Century

Wagoner Settlers in United States in the 20th Century

Suggested Readings for the name Wagoner +