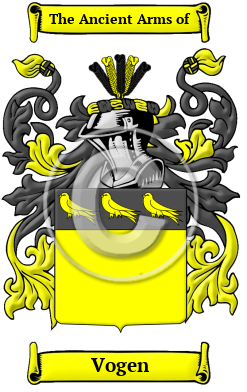 When the Strongbownian's arrived in Ireland there was already a system for creating patronymic names in place. Therefore, the native population regarded many of the Anglo-Norman naming practices that these settlers were accustomed to as rather unusual. Despite their differences, the two different systems eventually merged together rather insidiously. The Strongbownians, when they arrived, displayed a preference for used nickname surnames. Two of the most prevalent forms were oath nicknames and imperative names. Oath names often carried blessings or were formed from habitual expressions. Imperative names, formed from a verb added to a noun or an adverb, metaphorically described the bearer's occupations. The nick name surname Vogen is derived from a nickname for a person who wore a habitual expression of discontent or unhappiness. The surname Vogen is derived from the Welsh word gwgan, which is a diminutive of gwg, which means frown or scowl. The Gaelic form of the surname is Ugán.

Early Origins of the Vogen family

The surname Vogen was first found in Pembrokeshire in southern Wales. However, it is believed that they were descended from Gwrgyn, the Lord of Bryn in the county of Denbigh in north Wales. Very early in the family's history, an important branch were granted lands by Strongbow, Earl of Pembroke, in his invasion of Ireland in 1172 and thus began the dual country origins of the name. The progenitor of the family is believed to be Gwgan Ap, Lord of Brecknock, one of whose descendants married the heiress of Wiston, who was a descendant of Wizo the Fleming, Lord of Daugleddy.

Early History of the Vogen family

Prominent amongst the family during the late Middle Ages was Sir Henry Wogan, steward of the earldom of Pembroke in 1448; Sir John Wogan, a gentleman usher of the king's chamber and was granted certain offices in Pembrokeshire and Cardiganshire in consideration of his services in England and abroad, Sheriff of Cardiganshire in 1542 and 1556, and of Pembrokeshire in 1543 and 1554; Sir John Wogan (1588-1644) a Welsh politician, Member of Parliament for Pembrokeshire (1621-1622), (1625-1629) and (1640-1644); and his son, Thomas Wogan (born circa 1620), a Welsh Member of Parliament and one of the regicides...
Another 97 words (7 lines of text) are included under the topic Early Vogen Notables in all our PDF Extended History products and printed products wherever possible.

Migration of the Vogen family to Ireland

Some of the Vogen family moved to Ireland, but this topic is not covered in this excerpt.
Another 157 words (11 lines of text) about their life in Ireland is included in all our PDF Extended History products and printed products wherever possible.

Migration of the Vogen family

In the mid-19th century, Ireland experienced one of the worst periods in its entire history. During this decade in order to ease the pressure of the soil, which was actually depleted by the effects of the previous years' grain crops, landowners forced tenant farmers and peasants onto tiny plots of land that barely provided the basic sustenance a family required. Conditions were worsened, though, by the population of the country, which was growing fast to roughly eight million. So when the Great Potato Famine of the mid-1840s hit, starvation and diseases decimated the population. Thousands of Irish families left the country for British North America and the United States. The new immigrants were often accommodated either in the opening western frontiers or as cheap unskilled labor in the established centers. In early passenger and immigration lists there are many immigrants bearing the name Vogen: David, James, and John Vogan arrived in Philadelphia in 1858; Patrick Wogan arrived in New York State in 1804; George Wogan settled in Virginia in 1663.