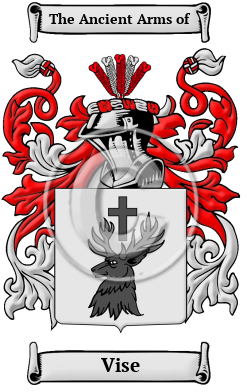 The Vise surname is thought to be derived from the Old French word "devise," meaning a "dweller at the boundary." It falls into the class of local names, that is, names derived from a place where the original bearer once lived or held land. It is plausible that some bearers of Vise took the name from one of several places in England: Viza in Ashwater, county Devon, Vyse Wood in Morthoe, county Devon, or Devizes in Wiltshire.

Early Origins of the Vise family

The surname Vise was first found in Sussex, where Robert atte Vise was recorded in the Subsidy Rolls for that county in the year 1327. [1] "Vyse is the name of an old Elstree family. John Vyse was vicar of Willian in the reign of Henry VIII. " [2]

Early History of the Vise family

This web page shows only a small excerpt of our Vise research. Another 55 words (4 lines of text) covering the years 1330 and 1601 are included under the topic Early Vise History in all our PDF Extended History products and printed products wherever possible.

Spelling variations of this family name include: Devise, Vises,Vize, Vise, Vice and others.

More information is included under the topic Early Vise Notables in all our PDF Extended History products and printed products wherever possible.

Vise migration to the United States +

Vise Settlers in United States in the 18th Century

Vise Settlers in United States in the 19th Century

Vise Settlers in Canada in the 19th Century