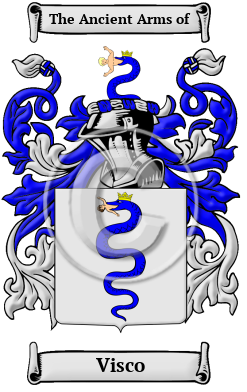 Early Origins of the Visco family

The surname Visco was first found in Milan (Italian: Milano, Milanese: Milan), the second-most populous city in Italy and the capital of Lombardy. The two palaces in the Piazza del Duomo, Palazzo Reale and the palace of the archbishops are notable. The city is rich in art, museums, galleries and sights. Castello Sforzesco stands in the Parco.

The Hours of Giangaleazzo Visconti is a Roman-liturgy illuminated Book of Hours that was commissioned by the ruler of Milan, Italy, Gian Galeazzo Visconti (1351-1402.) This work that was completed after this death, is one of the richest examples of an illustrated personal prayer book, now on display in the Biblioteca Nazionale in Florence. Reprints are available worldwide.

Early History of the Visco family

Prominent among bearers of this family in early times was Galeazzo I Visconti (1277-1328), Lord of Milan from 1322 to 1327; and his son, Azzone Visconti (1302–1339), Lord of Milan from 1329 until his death; Gian Galeazzo Visconti (1351-1402), the first Duke of Milan (1395), ruled the late-medieval city just before the dawn of the Renaissance, the great founding patron of the Certosa di Pavia, completing the Visconti Castle at Pavia begun by his father, married to Caterina Visconti; Caterina Visconti, Duchess of Milan (1361-1404), member of the Italian noble family Visconti, which ruled Milan from 1277 to 1447, served as...
Another 421 words (30 lines of text) are included under the topic Early Visco Notables in all our PDF Extended History products and printed products wherever possible.

Visco migration to the United States +

Visco Settlers in United States in the 19th Century

Visco Settlers in United States in the 20th Century