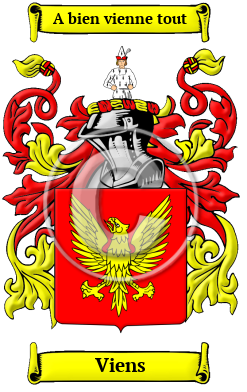 Early Origins of the Viens family

The surname Viens was first found in Burgundy (French: Bourgogne), an administrative and historical region of east-central France where this renowned family held a family seat since ancient times.

Descendants of this family divided into numerous branches as they prospered and established themselves in various regions. The Mirebeau branch of the family was established by Jean Vienne, Lord of Mirebel-en-Montagne around 1283, and one of his descendants was the Chamberlain to the Duke in 1399. Another Jean de Vienne was the Admiral of France in 1373, but unfortunately, he was killed at Nicopolis in 1396. Many members of this family were granted lands and titles in recognition of their bravery and acts of heroism displayed on the battlefield. Philippe, Hugues V's son, was the founder of the branch of the family of Lords of Pimont, Ruffey and the Counts of Commarin, during the 1300's. Notable among this branch of the family are: Gérard, Knight of the Order of the King and of Queen Eléonore of Hungary, Knight of Honour in the Parliament of Dijon in 1515; Jean, Baron of Ruffey, Governor of Bourbonnais and a Knight of Orders; Jacques-François, Lieutenant-General in Bourgogne, and the father of Charles, Baron of Châteauneuf and of Chevreau, and the Lieutenant-General of armies; Henri, Count of Commarin and the Lieutenant-General of Commarin who resigned in 1671; and Louis-Henri, Count of Vienne and Colonel of the Cavalry who died in 1793. A distinguished author of his time, Joseph Marie Vien, known also as "the Elder," lived from 1716 to 1809. Other branches of this noble family include the Barons of Chevreau, the Pagny branch, the Lords of Rollans and of Listenois, the Barons of Clairvaux, and the Lords of Saint-Georges and of Sainte-Croix. The family were deeply religious and some members of the family joined the clergy. The Archbishops of Besançon and of Rouen, and the Priests of Langres and of Chalon were from this family.

Jean Vien, born in 1648, son of Vivien-Jean and Suzanne (née Herault), travelled from France to Canada in the 17th century. After arriving in Quebec he married Catherine Gateau, born in 1651, daughter of Odart and Genevieve (née Drouet), on 29th November 1671. They remained together in Quebec and had children that all carried on the surname of Vien or Viens. [1]

Early History of the Viens family

More information is included under the topic Early Viens Notables in all our PDF Extended History products and printed products wherever possible.

Viens migration to the United States +

Viens Settlers in United States in the 18th Century

Viens Settlers in Canada in the 18th Century