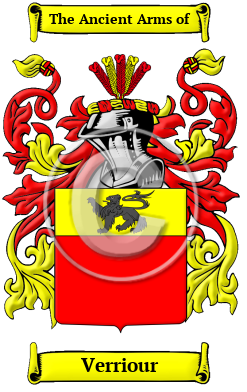 Early Origins of the Verriour family

The surname Verriour was first found in Norfolk where "Osberno Verrer" witnesses a grant of the younger William de Albini, Earl of Arundel, of some land at Quiddenham in Norfolk to Reading Abbey; and about 1272 Robert and Roger le Verer, of Essex, occur in the Rotuli Hundredorum. Walkeline le Werreer gave the advowson of the church of Winfrith (afterwards Winfrith-Newburgh) to Glastonbury Abbey, between 1102 and 1120; which grant was confirmed by his nephew, William de Glastonia, and afterwards by Robert de Newburgh, who describes the two preceding benefactors as his "ancestors." [1]

Early History of the Verriour family

This web page shows only a small excerpt of our Verriour research. Another 95 words (7 lines of text) covering the years 1273, 1273, 1455, 1487, 1664, 1685 and 1603 are included under the topic Early Verriour History in all our PDF Extended History products and printed products wherever possible.

The English language only became standardized in the last few centuries; therefore,spelling variations are common among early Anglo-Saxon names. As the form of the English language changed, even the spelling of literate people's names evolved. Verriour has been recorded under many different variations, including Verrer, Verrier, Verriour, Veryet, Verieur, Verry and many more.

Distinguished members of the family include William Verrier, Mayor of Sandwich in 1664; and John Verrier one of the Cinque Port Barons elected to support the Royal Canopy at James II.'s coronation in 1685. The dress of...
Another 37 words (3 lines of text) are included under the topic Early Verriour Notables in all our PDF Extended History products and printed products wherever possible.

Migration of the Verriour family

For many English families, the political and religious disarray that shrouded England made the far away New World an attractive prospect. On cramped disease-ridden ships, thousands migrated to those British colonies that would eventually become Canada and the United States. Those hardy settlers that survived the journey often went on to make important contributions to the emerging nations in which they landed. Analysis of immigration records indicates that some of the first North American immigrants bore the name Verriour or a variant listed above: Thomas Very who was among the very first settlers arriving in the colonies, when he went to New England in 1647; or Margaret Very who went to Maryland in 1676. Issac Very arrived in Virginia in the year 1700. James Verrier was brought to America as a convict, and left to do the best he could with himself in a new land in 1769. Jane Verrier arrived in Baltimore, at the age of 36.