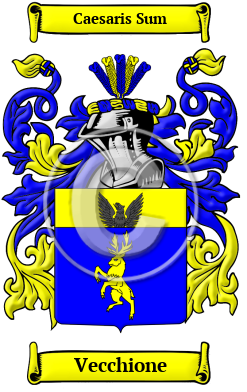 The distinguished surname Vecchione originated in an area of Italy, known as the Papal States. Although people were originally known only by a single name, it became necessary for people to adapt a second name to identify themselves as populations grew and travel became more frequent. The process of adopting fixed hereditary surnames was not complete until the modern era, but the use of hereditary family names in Italy began in the 10th and 11th centuries. Italian hereditary surnames were developed according to fairly general principles and they are characterized by a profusion of derivatives coined from given names. Although the most traditional type of family name found in the region of the Papal States is the patronymic surname, which is derived from the father's given name, the nickname type of surname is also frequently found. Nickname surnames were derived from an eke-name, or added name. They usually reflected the physical characteristics or attributes of the first person that used the name. The surname Vecchione came from a person who was of aged appearance. The surname Vecchione is derived from the Italian word vecchi, which further derives from the late Latin word veclus, which mean old, aged, or elderly.

Early Origins of the Vecchione family

The surname Vecchione was first found in Rieti, a city on the borders of the Papal States.

Early History of the Vecchione family

This web page shows only a small excerpt of our Vecchione research. More information is included under the topic Early Vecchione History in all our PDF Extended History products and printed products wherever possible.

There are many variations of most of those Italian names that originated in the medieval era. Some of these come from regional differences, like the tradition of ending northern names in "o" and southern names in "i". Others come from inaccuracies in the recording process, which were extremely common in the eras before dictionaries standardized spelling. Some of the spelling variations of Vecchione are Vecchi, Della Vecchia, La Vecchia, Del Vecchio, De Vecchi, Lo Vecchio, Vecchia, Vecchiatini, Vecchione, Vecchiotti, VecChina, Vecchiarini, Vecchiarelli, Vechietti, Vechiet, Vechione, Vecchiato, Vecchiuzzo and many more.

Prominent among members of the family was Palma il Vecchio (c. 1480-1528), born Jacopo Palma or known as Jacopo Negretti, an Italian painter of the Venetian school born at Serina Alta near Bergamo; Pietro della Vecchia, also sometimes known as Pietro Muttoni, (1603-1678), an Italian painter of the Baroque period; and Bartolomeo Vecchiarelli, who assumed the...
Another 56 words (4 lines of text) are included under the topic Early Vecchione Notables in all our PDF Extended History products and printed products wherever possible.

Migration of the Vecchione family

Research into the origins of individual families in North America has revealed records of the immigration of a number of people bearing the name Vecchione or a variant listed above: John Del Vecchio arrived in New York in 1822; Matteo Vecchiola, who came to Allegheny County Pennsylvania in 1891; Adele Vecchiarelli, aged 20, who arrived at Ellis Island from Agnone, Italy, in 1919.