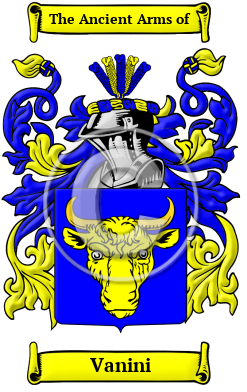 Early Origins of the Vanini family

The surname Vanini was first found in Udine, a town in Venetia and capital of the province of Udine. An old walled city it dates back to early Roman times. There is an old castle (1517) in the center of the town which is now used as a museum and art gallery. The church of S. Maria della Purita is notable with many treasures. The town hall was built in 1448. It was the seat of the Italian command in WWI. In those ancient times only persons of rank, the podesta, clergy, city officials, army officers, artists, landowners were entered into the records. To be recorded at this time, at the beginning of recorded history, was of itself a great distinction and indicative of noble ancestry.

Early History of the Vanini family

Prominent among members of the family was Francesco Vanni (1563-1610), an Italian painter of the Mannerist style, active in Rome and his native city of Siena; and his son Raffaello Vanni (1590-1657), an Italian painter of the Baroque. Ottavio Vannini (1585-c. 1643)...
Another 42 words (3 lines of text) are included under the topic Early Vanini Notables in all our PDF Extended History products and printed products wherever possible.

Vanini migration to the United States +

Vanini Settlers in United States in the 19th Century