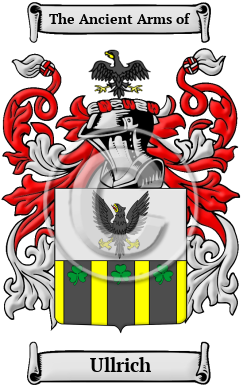 The Ullrich surname comes from the old German personal name Uodal-rich. Literally the name means "noble heritage" + "rich, powerful." The name became popular in the Middle Ages in part due to Saint Ulrich (893-973), Bishop of Augsburg, Germany. He was the first saint to be canonized not by a local authority but by the Pope.

Early Origins of the Ullrich family

The surname Ullrich was first found in Bavaria, in the city of Nuremburg, where the name was anciently associated with the tribal conflicts of the area. They declared allegiances to many nobles and princes of early history, lending their influence in struggles for power and status within the region. They branched into many houses, and their contributions were sought by many leaders in their search for power.

The name as a first name was associated with many notable figures of the mediaeval period, such as St. Ulrich, Bishop of Augsburg, and Count Udalrich I (fl. 778-814), a son of Gerold of Vinzgau. His sister Hildegard, (b. 754), married King Charlemagne in 771 and his father, Gerold was a count in Kraichgau and Anglachgau.

Early History of the Ullrich family

Prominent among members of the name Ullrich in this period include Anthony Ulrich (1633-1714), Duke of Brunswick-Lüneburg and ruled over the Wolfenbüttel subdivision of the duchy from 1685 until 1702; and Johann Warmund Ulrich, a...
Another 35 words (2 lines of text) are included under the topic Early Ullrich Notables in all our PDF Extended History products and printed products wherever possible.

In the United States, the name Ullrich is the 8,781st most popular surname with an estimated 2,487 people with that name. [1]

Ullrich migration to the United States +

Ullrich Settlers in United States in the 18th Century

Ullrich Settlers in United States in the 19th Century

Ullrich Settlers in United States in the 20th Century

Historic Events for the Ullrich family +