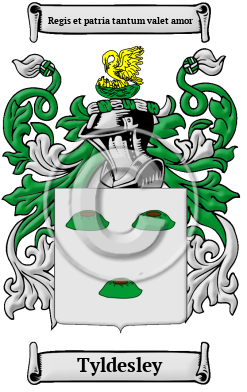 Early Origins of the Tyldesley family

The surname Tyldesley was first found in Lancashire at Tildesley or Tydelsley, a township and parochial district, in the union of Leigh, hundred of West Derby.

"Tyldesley, though unnoticed in Domesday Book, certainly formed part of the Norman barony of Warrington, being claimed to be within its jurisdiction in all pleas to quo warrantos by the lords of that honour or barony that have occurred. Under these barons, the proprietors who adopted the local name settled, holding by service of the tenth part of a knight's fee. The suits to the courts of the barony and hundred have long been disused; and the mesne manor, also, is nearly extinct. Of the family of Tyldesley was the celebrated royalist Sir Thomas Tyldesley." [1]

The township of Astley in Lancashire was another ancient family homestead. "The first recorded tenant of [Astley] manor who also held the neighbouring manor of Tyldesley occurs about the end of the twelfth century as Hugh son of Henry de Tyldesley. Henry de Tyldesley, lord of Tyldesley, was a juror on the inquest of the Gaston Scutage in 1243, and probably survived until after 1265. His successor, another Henry, was defendant in a plea at Lancaster in 1292, and father of a third Henry, to whom he gave the manor of Tyldesley, and of Hugh, to whom he gave this manor. In 1327 Hugh de Tyldesley was one of the men of this hundred summoned to join the king's forces on the marches of Scotland, and the year following was returned in an extent of the castle of Halton as holding this manor for the tenth part of a knight's fee. His name occurs both in Astley and Tyldesley in 1330 and 1332 with other free tenants " [2]

Another branch of the family was found at Blackpool in Lancashire at one time. "Fox Hall [in Blackpool], once a sequestered residence of the gallant family of Tildesley, is now a farmhouse." [1]

Early History of the Tyldesley family

This web page shows only a small excerpt of our Tyldesley research. Another 107 words (8 lines of text) covering the years 1672, 1596 and 1651 are included under the topic Early Tyldesley History in all our PDF Extended History products and printed products wherever possible.

Spelling variations of this family name include: Tildesley, Tyldesley, Tildeslie, Tyldeslie, Tildsley and many more.

Distinguished members of the family include Sir Thomas Tyldesley (1596-1651), English Royalist General. He was the elder son of Edward Tyldesley of Morleys Hall, Astley, in the parish of Leigh, Lancashire. "In early life he adopted the military profession and served in the wars in Germany. At the time of the outbreak of the civil war Tyldesley was living...
Another 58 words (4 lines of text) are included under the topic Early Tyldesley Notables in all our PDF Extended History products and printed products wherever possible.

Tyldesley migration to the United States +

Tyldesley Settlers in United States in the 20th Century