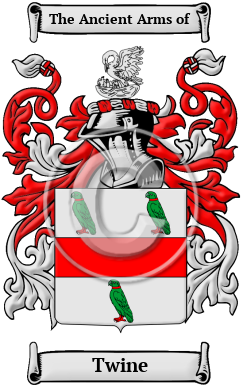 Early Origins of the Twine family

The surname Twine was first found in Yorkshire where they held a family seat at Kilton Castle. Thwing is located in the Yorkshire Wolds in the civil parish of Thwing and Octon and dates back to the Domesday Book of 1086 where it was listed as Tuennc, in the hundred of Burton. Literally the place name is derived from the Old English word "thweng" which means "narrow strip of land." [1]

About 1220, Sir Robart de Thwenge (Thweng, Thwing, Tweng) was elected by other English Barons to travel to Rome with a complaint against the pontiff in the encroachment of their ecclesiastical rights. The family were elevated to the peerage about 1300 after Marmaduke de Twenge distinguished himself in the Scottish Wars. He was summoned to Parliament as a Baron and the family became one of the senior families in Yorkshire. [2]

John Twenge (Saint John of Bridlington, John Thwing, John of Thwing, John Thwing of Bridlington) (1319-1379), born in the village of Thwing was an English saint who was canonized in 1401 by Pope Boniface IX. Nunthorpe, a chapelry, in the parish of Ayton, union of Stokesley held a manor that was bestowed by the Conqueror upon Robert de Brus, and from whom it descended by marriage to the Thweng family. [3]

Early History of the Twine family

This web page shows only a small excerpt of our Twine research. Another 101 words (7 lines of text) covering the years 1635 and 1680 are included under the topic Early Twine History in all our PDF Extended History products and printed products wherever possible.

Another 28 words (2 lines of text) are included under the topic Early Twine Notables in all our PDF Extended History products and printed products wherever possible.

Twine migration to the United States +

Twine Settlers in United States in the 19th Century

Twine Settlers in Australia in the 19th Century

Twine Settlers in New Zealand in the 19th Century