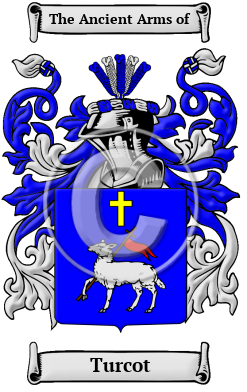 Early Origins of the Turcot family

The surname Turcot was first found in Provence, where this distinguished family held a family seat since ancient times.

Since the 12th century, this impressive family has been known in Italy by the du Turca name which originated from the Viscounts of Toscanne. In 1225, the Emperor, Frederick II, instructed his chaplain to reconcile various branches of the name that originated from the House of Toscanne and the Turca name was among that list. The next mention of the family was in 1320, with a spelling variation, when Gapençais of Torquat is mentioned. Throughout the centuries the family expanded, prospered and branched out to Lyon where the Torquet family is mentioned in 1500, and in 1558 where the Torquat family of Coulerie and of Bretagne are recorded. Playing an important role in his community, Laurens Turcal of la Valteline in Geneva is mentioned in 1572.

During the 16th century, the Turcat's established themselves at Marseille, where Anne Turcat Le Bon (,"The Good,") registered the Coat of Arms in 1696. Participating actively in the affairs of society, François and Louis are mentioned as members of this distinguished family in 1669 and in 1673. During the 1700's, many marriages are registered, among them were Jean-Baptiste who married Thérèse Camoin in 1718. From this distinguished family came Architects, a Virtuoso Pianist, and Léon and Emile Turcat who were the creators of one of the first automotive assembly lines.

Abel Turcotte, born in 1631, was a French carpenter that travelled from Poitou, France to Canada in the 17th century. After arriving in the Canadian province of Quebec he married Marie Giroux, at Château-Richer on 27th November 1662. They remained together in Quebec until Abel's death at Sainte-Famille-de-l'île-d'Orléans on 17th September 1687. [1]

Early History of the Turcot family

This web page shows only a small excerpt of our Turcot research. More information is included under the topic Early Turcot History in all our PDF Extended History products and printed products wherever possible.

More information is included under the topic Early Turcot Notables in all our PDF Extended History products and printed products wherever possible.

Turcot migration to the United States +

Turcot Settlers in United States in the 18th Century

Turcot Settlers in Canada in the 17th Century

Turcot Settlers in Canada in the 18th Century

Turcot Settlers in Australia in the 19th Century