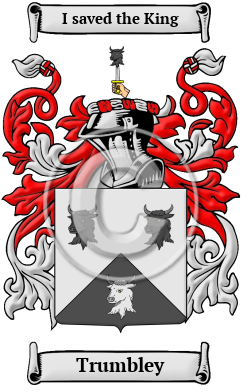 In ancient Scotland, a tribe called the Boernicians were the first to use the name Trumbley. It is a nickname for a man named Rule (sometimes Ruel) who saved King Robert the Bruce at Stirling Park from a charging bull by turning the bull's head.

Early Origins of the Trumbley family

The surname Trumbley was first found in Roxburghshire. Referring to the aforementioned Rule reference, there was a noble family of Rule, which derived its name from the Water of Rule, an affluent of the Teviot.

Early History of the Trumbley family

In the Middles Ages scribes spelled names by their sound. Often a name was written under a different spelling variation each time it was recorded. Trumbley has appeared as Turnbull, Turnball, Trimble, Trimbell, Trumbell, Trumbill, Turnbul and many more.

Notable amongst bearers of this family name during their early history was William Turnbull (d. 1454), Bishop of Glasgow, who procured from the pope a charter to establish a university in the city...
Another 32 words (2 lines of text) are included under the topic Early Trumbley Notables in all our PDF Extended History products and printed products wherever possible.

Migration of the Trumbley family to Ireland

Some of the Trumbley family moved to Ireland, but this topic is not covered in this excerpt.
Another 50 words (4 lines of text) about their life in Ireland is included in all our PDF Extended History products and printed products wherever possible.

Migration of the Trumbley family

The ancestors of Boernician-Scottish settlers dot North America even today. They settled all along the east coast when they came over, but some went north as United Empire Loyalists at the time of the War of Independence. However, these strong lines endured as Scottish families in the United States and Canada have rediscovered much of the heritage that was taken from them centuries ago. Some of the first immigrants to cross the Atlantic and come to North America carried the name Trumbley, or a variant listed above: Alexander Turnbull, who settled in East New Jersey in 1684; Thomas Turnbul, a Scottish prisoner sent to New Jersey in America in 1685; James Turnbull, who arrived in Charles Town [Charleston], South Carolina in 1734.