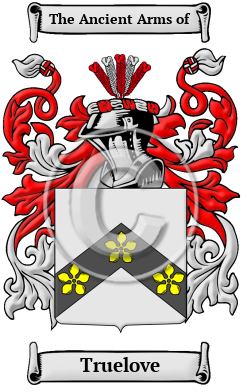 This "surname is derived from a nickname, as in 'betrothed' or 'bound,' from the Scandinavian 'trot lof,' bound in law, a bondsman." [1] [2]

Another source notes the name was derived from the Old English treowe and lufu 'faithful love' in the sense 'faithful lover, sweetheart, beloved'. [3]

Interestingly, "in the 14th century, this was the name of an aromatic herb (a 'breath-sweetener') - 'Under his tonge a trewe-love he beer [bare]' Chaucer, Canterbury Tales.

Early Origins of the Truelove family

The Yorkshire Poll Tax Rolls of 137 include Willelinus Trewluf and Ricardus Trewluff as holding estates there at that time. [1] In Somerset, John Truvelove was listed there 1 Edward III (during the first year of King Edward III's reign.) [4]

Early History of the Truelove family

This web page shows only a small excerpt of our Truelove research. Another 55 words (4 lines of text) covering the years 1275, 1296, 1285, 1597 and 1802 are included under the topic Early Truelove History in all our PDF Extended History products and printed products wherever possible.

More information is included under the topic Early Truelove Notables in all our PDF Extended History products and printed products wherever possible.

In the United States, the name Truelove is the 9,886th most popular surname with an estimated 2,487 people with that name. [5]

Truelove migration to the United States +

Truelove Settlers in United States in the 17th Century

Truelove Settlers in United States in the 18th Century

Truelove Settlers in United States in the 19th Century

Truelove Settlers in United States in the 20th Century

Truelove Settlers in Australia in the 19th Century