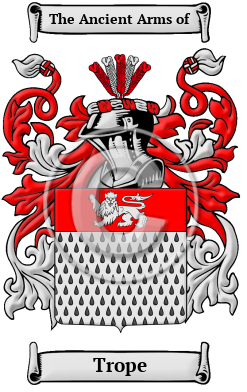 Early Origins of the Trope family

The surname Trope was first found in Norfolk where they held a family seat as Lords of the Manor. The family name was first referenced in the year 1177 when Adam Drope held lands.

Early History of the Trope family

Distinguished members of the family include Francis Drope (1629?-1671), an English arboriculturist, younger son of the Rev. Thomas Drope, B.D., vicar of Cumnor, Berkshire, and rector of Ardley, near Bicester, Oxfordshire. "He became a demy of Magdalen College, Oxford, in 1645, three years after his brother John, and graduated as B.A. in 1647. In 1648 he was ejected, having probably, like his brother, borne arms for the king, and...
Another 68 words (5 lines of text) are included under the topic Early Trope Notables in all our PDF Extended History products and printed products wherever possible.

Trope Settlers in West Indies in the 17th Century