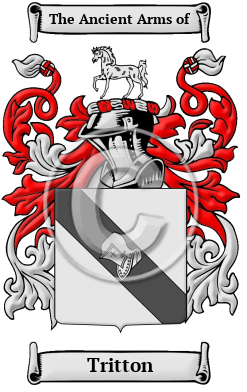 Early Origins of the Tritton family

The surname Tritton was first found in Cheshire. "This family, originally written Treton, and springing from Cheshire, settled at Lewes, co. Sussex in the XVI century. The family became extinct in the XVIII century, but not the name, for singularly enough, at Lewes, and in a great many of the surrounding parishes, Trayton is an extremely common baptismal name. " [1]

The Treeton or Trayton may have originated in Treeton, South Yorkshire where the place name dates back to the Domesday Book of 1086 when it was known as Tretone. [2] [3] The place name literally means "tree enclosure or farmstead." [4]

The Trett variant was frequently listed in the early Pipe Rolls. Robert filius Trote, 1165 was listed in the the Pipe Rolls, or Sheriff's Annual Accounts of the Counties of Cumberland, Westmorland and Durham during the reigns of Henry II, Richard I and John. The same source lists Richard filius Truite, 1179. [5]

"The Trotts are now established in the neighbouring districts of Honiton and Cullompton. John Trott, one of the martyrs of Monmouth's rebellion in 1685, died on the scaffold at Bridgewater." [7]

Early History of the Tritton family

Spelling variations of this family name include: Trayton, Treyton, Traton, Tratton and others.

More information is included under the topic Early Tritton Notables in all our PDF Extended History products and printed products wherever possible.

Tritton migration to the United States +

Tritton Settlers in United States in the 17th Century

Tritton Settlers in Australia in the 19th Century