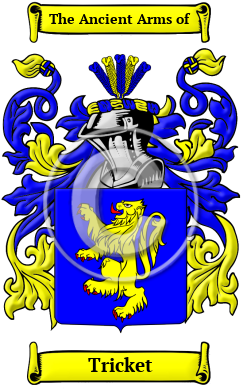 Early Origins of the Tricket family

The surname Tricket was first found in Middlesex, where Radulphus Trichet paid a fine in 1130 for his father's land. Another reference lists Ralph Trichet in the Pipe Rolls of Middlesex in the same year. Robert Triket was listed in the Curia Regis Rolls of Buckinghamshire in 1198. [2] Ida Triket held Brembeley, Middlesex in the 13th century by service of holding a towel for the king's hands at the Coronation [3]

Early History of the Tricket family

This web page shows only a small excerpt of our Tricket research. Another 98 words (7 lines of text) covering the years 1620 and 1682 are included under the topic Early Tricket History in all our PDF Extended History products and printed products wherever possible.

Another 38 words (3 lines of text) are included under the topic Early Tricket Notables in all our PDF Extended History products and printed products wherever possible.

Migration of the Tricket family