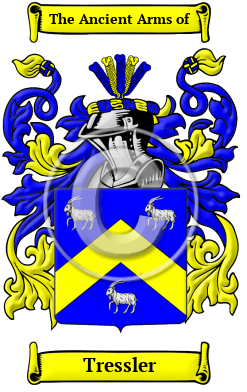 The illustrious surname Tressler finds its origin in the rocky, sea swept coastal area of southwestern England known as Cornwall. Although surnames were fairly widespread in medieval England, people were originally known only by a single name. The process by which hereditary surnames were adopted is extremely interesting. As populations grew, people began to assume an extra name to avoid confusion and to further identify themselves. Under the Feudal System of government, surnames evolved and they often reflected life on the manor and in the field. Lords and their tenants often became known by the name of the feudal territory they owned or lived on. Unlike most Celtic peoples, who favored patronymic names, the Cornish predominantly used local surnames. This was due to the heavy political and cultural influence of the English upon the Cornish People at the time that surnames first came into use. Local surnames were derived from where a person lived, held land, or was born. While many Cornish surnames of this sort appear to be topographic surnames, which were given to people who resided near physical features such as hills, streams, churches, or types of trees, many are actually habitation surnames derived from lost or unrecorded place names. The name Tressler is a local type of surname and the Tressler family lived in Cornwall, at the manor of Tresilian, in the parish of Newlyn.

Early Origins of the Tressler family

The surname Tressler was first found in Cornwall where they were Lords of the Manor of Tresilian in Newlyn, in Cornwall.

One of the first records of the family was Sir Robert Tresilan (d. 1388), Chief Justice of the King's Bench, "was no doubt a native of Cornwall, in which county he held the manors of Tresilian, Tremordret, Bonnamy, Stratton, and Scilly. " [1]

We found another passage clearing up the fate of Robert Tresilian. "The manor of Tremoderet, [in the parish of Duloe, Cornwall] now generally called Tremadart, belonged at a very early period to the family of Hewis. By an heiress of this family it was carried in marriage to. Sir Robert Tresilian, chief justice of the King's Bench, who was executed at Tyburn in 1338, for recommending arbitrary measures which his sovereign had not power to execute. His widow, who afterwards married Sir John Coleshill, made interest to have the previous forfeiture of her lands, on the death of her former husband, revoked." [2]

Early History of the Tressler family

This web page shows only a small excerpt of our Tressler research. Another 149 words (11 lines of text) covering the years 1350, 1388, 1590, 1450 and 1515 are included under the topic Early Tressler History in all our PDF Extended History products and printed products wherever possible.

Cornish surnames are characterized by a multitude of spelling variations. The frequent changes in surnames are due to the fact that the Old and Middle English languages lacked definite spelling rules. The official court languages, which were Latin and French, were also influential on the spelling of a surname. Since the spelling of surnames was rarely consistent in medieval times, and scribes and church officials recorded names as they sounded rather than adhering to any specific spelling rules, it was common to find the same individual referred to with different spellings of their surname in the ancient chronicles. Moreover, a large number of foreign names were brought into England, which accelerated and accentuated the alterations to the spelling of various surnames. Lastly, spelling variations often resulted from the linguistic differences between the people of Cornwall and the rest of England. The Cornish spoke a unique Brythonic Celtic language which was first recorded in written documents during the 10th century. However, they became increasingly Anglicized, and Cornish became extinct as a spoken language in 1777, although it has been revived by Cornish patriots in the modern era. The name has been spelled Tresilian, Treysilian, Trasilian, Tresylian and many more.

Another 28 words (2 lines of text) are included under the topic Early Tressler Notables in all our PDF Extended History products and printed products wherever possible.

In the United States, the name Tressler is the 10,551st most popular surname with an estimated 2,487 people with that name. [3]

Tressler migration to the United States +

An examination into the immigration and passenger lists has discovered a number of people bearing the name Tressler:

Tressler Settlers in United States in the 18th Century

Tressler Settlers in Australia in the 19th Century