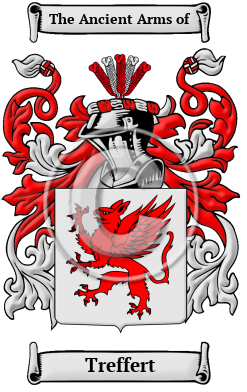 Early Origins of the Treffert family

The surname Treffert was first found in Lancashire where they held a family seat from very ancient times at Trafford, before the Norman Conquest in 1066. Randolphus Trafford lived about the year 1030 and was Lord of the manor of Trafford. His son Randolphus (Randolphus filius Radulphi) died about the year 1080. However, two other references claims the progenitor of the family was Ralph de Trafford who died about 1050. [1] [2]Trafford is today a metropolitan borough of Greater Manchester but claims its origin from as an Anglo-French version of "Stratford," deriving from the Old English words stræt (a Roman road) and ford (a river crossing). Combined the place name meant "ford on a Roman road." [3] Later the parish of Wilmslow in Cheshire was an ancient family seat. "The church is a handsome and very ancient structure in the decorated and later English styles, with a square tower; it comprises a nave, chancel, and two aisles, of which the east end of one and the west end of the other are inclosed as sepulchral chapels, for the families of Dunham and Trafford." [4] The same church includes an inscription to Henry Treffort, rector, 1537. Sir Thomas Joseph de Trafford, Bart. was patron of the parish.

Early History of the Treffert family

Spelling variations of this family name include: Trafford, Trafforde, Traford and others.

Notables of the family at this time include Sir Henry de Trafford (died c. 1288) was knighted before 1284; and his son, Sir Henry de Trafford (died 1334) was knighted in 1309; Sir Henry Trafford, knighted at Whitsuntide in 1426; Sir John Trafford, knighted c. 1444; Sir Edmund...
Another 48 words (3 lines of text) are included under the topic Early Treffert Notables in all our PDF Extended History products and printed products wherever possible.

Treffert migration to the United States +

Treffert Settlers in United States in the 19th Century