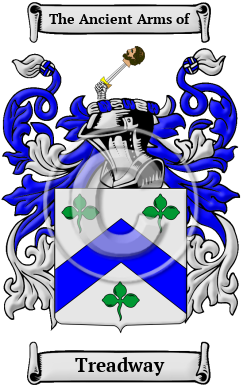 Early Origins of the Treadway family

The name literally means "dweller at a path, or road, by a spring or stream." [2] "The Tredwells or Treadwells are also represented in Kent. The name of Treadwell occurred in Enstone parish 200 years ago. T. Treadwell was mayor of Oxford in 1758." [3]

Up in Scotland, Saint Triduana, also known as Trodline, Tredwell, and in Norse as Trøllhaena, was an early Christian woman who was associated with various places in Scotland. It is thought she probably lived sometime between the 4th and 8th centuries. St Tredwell's Chapel, Papa Westray is a renowned Orkney pilgrimage-centre, standing on a conical mound on a small peninsula. Here, late medieval walls can be seen, built over Iron Age ruins.

Early History of the Treadway family

Distinguished members of the family include Lady Lettice Mary Tredway (1593-1677), an English abbess in Paris, the daughter of Sir Walter Tredway of Beckley, Buckinghamshire, and afterwards of Northamptonshire. Born in 1593...
Another 32 words (2 lines of text) are included under the topic Early Treadway Notables in all our PDF Extended History products and printed products wherever possible.

In the United States, the name Treadway is the 4,013rd most popular surname with an estimated 7,461 people with that name. [4]

Treadway migration to the United States +

Treadway Settlers in United States in the 17th Century