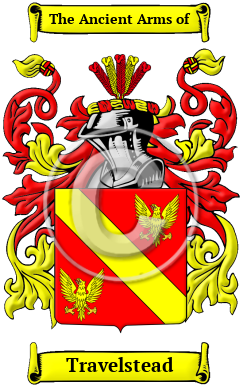 Early Origins of the Travelstead family

The surname Travelstead was first found in Berkshire where William Travail witnessed a charter of Robert de Albini to Wallingford Priory (no date given.)

Early History of the Travelstead family

Distinguished members of the family include Sir Thomas Travell (c. 1657-1724), a descendant of a junior branch of a family which, originally from Shropshire, had settled in Northamptonshire by the mid-16th century. His grandfather had been a London merchant, but his father, who had returned...
Another 45 words (3 lines of text) are included under the topic Early Travelstead Notables in all our PDF Extended History products and printed products wherever possible.

Migration of the Travelstead family