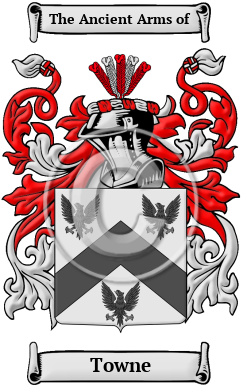 The surname Towne is of Anglo-Saxon origin. It is derived from the Old English "tun," which originally meant "fence" or "enclosure," but soon came to mean "enclosure round a house," "homestead," "village," or "town." The name was originally preceded by a preposition, and referred to "one who lived in or at the village or town."

Early Origins of the Towne family

The surname Towne was first found in Suffolk. The written history of the name dates back as far as 1095, when Wistric Oftun was recorded in the records of the abbey at Bury St. Edmunds. Variations on the surname, such as Abothetoune, atte Tun, and Douninthetune, could also be found in this region at an early date.

Early History of the Towne family

Notables of the family at this time include John Towne (c.1583), a British actor, Robert Towne (c.1650), a religious writer, and Francis Towne (1739-1816), a well-known British watercolor painter of landscapes. Rebecca Towne Nurse (or Nourse) (1621-1692) (née Towne)...
Another 39 words (3 lines of text) are included under the topic Early Towne Notables in all our PDF Extended History products and printed products wherever possible.

In the United States, the name Towne is the 5,076th most popular surname with an estimated 4,974 people with that name. [1]

Towne migration to the United States +

Towne Settlers in United States in the 17th Century

Towne Settlers in United States in the 18th Century

Towne Settlers in United States in the 19th Century

Towne Settlers in Canada in the 18th Century

Towne Settlers in West Indies in the 17th Century

Historic Events for the Towne family +