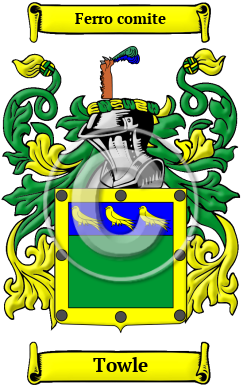 The Towle surname is a patronymic created from the Old English name Toll, "a pet form of Bartholomew (son of Talmai, furrow); dweller, or collector, at a tollhouse." [1]

Early Origins of the Towle family

The surname Towle was first found in Lancashire where the Lancashire Wills at Richmond listed John Towlyngson, of the parish of Mellyinge (no date); Richard Towlson, or Tounsoun, of Dalton, 1587; George Toulson, of Poulton, 1672; and George Towlnson, of Pilling, 1673. [2] Further to the south, John Tulesan was Lord Mayor of London in 1252.

Early History of the Towle family

Another 43 words (3 lines of text) are included under the topic Early Towle Notables in all our PDF Extended History products and printed products wherever possible.

In the United States, the name Towle is the 4,981st most popular surname with an estimated 4,974 people with that name. [3]

Towle migration to the United States +

Towle Settlers in United States in the 17th Century

Towle Settlers in United States in the 19th Century

Towle Settlers in United States in the 20th Century

Towle Settlers in Australia in the 19th Century

Towle Settlers in New Zealand in the 19th Century