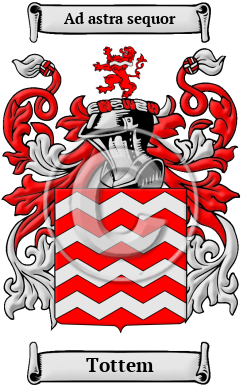 Early Origins of the Tottem family

The surname Tottem was first found in Middlesex, where they were Lords of the manor of Tottenham in that shire from ancient times. "This place, written in Domesday Book Toteham, and now sometimes called Tottenham High Cross, is a genteel village, consisting chiefly of one long street formed by houses irregularly arranged, on the road from London to Cambridge." [1] Literally the place name means "homestead or village of a man called Totta," from the Old English personal name + "ham." [2]

Early History of the Tottem family

This web page shows only a small excerpt of our Tottem research. Another 71 words (5 lines of text) covering the years 1959, 1685, 1758, 1731 and are included under the topic Early Tottem History in all our PDF Extended History products and printed products wherever possible.

Spelling variations of this family name include: Totten, Totton, Todden, Todenham, Tottenham and others.

More information is included under the topic Early Tottem Notables in all our PDF Extended History products and printed products wherever possible.

Migration of the Tottem family to Ireland

Some of the Tottem family moved to Ireland, but this topic is not covered in this excerpt.
Another 280 words (20 lines of text) about their life in Ireland is included in all our PDF Extended History products and printed products wherever possible.

Migration of the Tottem family

Some of the first settlers of this family name or some of its variants were: Adam, Christopher, Edward, James, Mathew, Stevens, Thomas and William Totten arrived in Philadelphia between 1824 and 1866; E. J. Totten arrived in San Francisco in 1850.