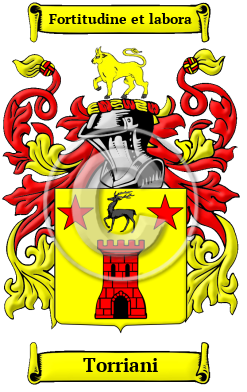 Early Origins of the Torriani family

The surname Torriani was first found in Piedmont (Italian: Piemonte, Piedmontese and Occitan: Piemont), a territorial division of northern Italy at the foot of the Alps consisting of the provinces of Alessandria, Cuneo, Novara and Turin. Later Aosta and Vercelli were added and still later, Asti. History is related back to 49 B.C. The house of Savoy rose in 1000 A.D. In those ancient times only persons of rank, the podesta, clergy, city officials, army officers, artists, landowners were entered into the records. To be recorded at this time, at the beginning of recorded history, was of itself a great distinction and indicative of noble ancestry. The family were the ancient Lords of Perlo in Piedmont.

Early History of the Torriani family

Prominent among members of the family was Orazio Torriani (fl. 1602-1657) Italian architect who worked in Rome, best known for the church of San Lorenzo in Miranda and the church of San Francesco di Paola (1624-1630); and Giuseppe Antonio Torri (1655-c. 1713) an Italian architect from Bologna. Pietro Torrigiano (1472-1522), was an Italian sculptor and draughtsman, born at Florence. Torrigiano came in contact with Michelangelo, and the famous quarrel took place in which Buonarroti was disfigured for life. "It was Buonarotti's habit to banter (uccellare) all who were drawing there...
Another 89 words (6 lines of text) are included under the topic Early Torriani Notables in all our PDF Extended History products and printed products wherever possible.

Torriani migration to the United States +

Torriani Settlers in United States in the 20th Century