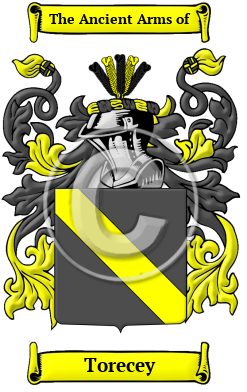 Early Origins of the Torecey family

The surname Torecey was first found in the Annals of Normandy where "both 'Sire de Torcy' and ' Seneschal de Torcy' appear." [1] The name is derived from the Norman fief and honour of Torcy.

The family rose to great prominence in England after the Conquest when they were listed as "Archers of Val de Real, and of Bretheul, and of many other places." [1]

"The De Torcys certainly continued in Normandy up to the end of the last century. Ithier de Torcy was a crusader. A Marquis de Torcy was one of the signatories of the Treaty of Utrecht; and one of the name, belonging to the Baillage de Caen, was among the Norman nobles assembled in the Church of St. Stephen, at Caen, in 1789.

In England, Hugh de Torci, and his brother Hasletus, are found in Devonshire during the reign of Henry I.- Rotulus Magnus Pipe. But I can find no further notice whatever of them in the county, and very little elsewhere." [1]

Early History of the Torecey family

More information is included under the topic Early Torecey Notables in all our PDF Extended History products and printed products wherever possible.

Migration of the Torecey family

Some of the first settlers of this family name or some of its variants were: Jacques Torcee settled in Philadelphia in 1754.