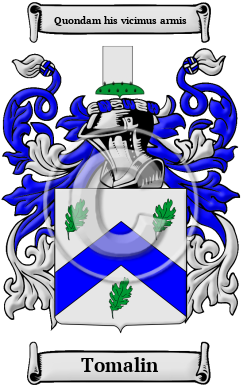 The Celtic origin of the name Tomalin was long ago developed in Wales. This surname comes from the names Tam, Thom, and Tom, which are pet forms of the personal name Thomas. The surname Tomalin features a double diminutive, formed from the suffixes -el and -in. [1] [2] [3]

Early Origins of the Tomalin family

The surname Tomalin was first found in Breconshire (Welsh: Sir Frycheiniog), a traditional county in southern Wales, which takes its name from the Welsh kingdom of Brycheiniog (5th-10th centuries), where they were conjecturally descended from Elystan Glodrydd, Prince of Fferllys, through Thomas of Llyn Madoc. Hence Tomlyn, in North Wales was commonly replaced by an 'a' hence Tamlyn.

Early English rolls provide us a glimpse of the spelling variations used through Medieval times. Today we typically need to look beyond the spellings of these entries and concentrate on on a phonetic appreciation of the names. Peter Tamelyn was listed in the Subsidy Rolls for Suffolk in 1327. [4] "The 14th - cent. English forms are Tomelyn, Thomelyn, Tomlyn, Thomlyn." [2] In Somerset, John Tomelyn and John Thomelyn were both listed there 1 Edward III (in the first year of King Edward III's reign.) [5]

Early History of the Tomalin family

Compared to other ancient cultures found in the British Isles, the number of Welsh surnames are relatively few, but there are an inordinately large number of spelling variations. These spelling variations began almost as soon as surname usage became common. People could not specify how to spell their own names leaving the specific recording up to the individual scribe or priest. Those recorders would then spell the names as they heard them, causing many different variations. Later, many Welsh names were recorded in English. This transliteration process was extremely imprecise since the Brythonic Celtic language of the Welsh used many sounds the English language was not accustomed to. Finally, some variations occurred by the individual's design: a branch loyalty within a family, a religious adherence, or even patriotic affiliations were indicated by spelling variations of one's name. The Tomalin name over the years has been spelled Tamblyn, Taplin, Tapling, Tomblyn, Tomlyn, Tomline and many more.

Prominent amongst the family during the late Middle Ages was Richard Tomlins or Tomlyns (1563-1650), an English lawyer and politician who sat in the House of Commons between 1621 and 1629; and Sir George Pretyman Tomline (1750-1828), born George Pretyman, Bishop of Lincoln (1787-1820.) He was "tutor of the younger Pitt, and bishop of Winchester, was the son of George Pretyman of Bury St. Edmunds, by his wife Susan, daughter of John Hubbard. His father represented an ancient and respectable Suffolk family which had held land at Bacton in Suffolk from the fifteenth century. Tomline (who until 1803 bore the name...
Another 176 words (13 lines of text) are included under the topic Early Tomalin Notables in all our PDF Extended History products and printed products wherever possible.

Migration of the Tomalin family

Motto: Quondam his vicimus armis
Motto Translation: We formerly conquered with these arms.